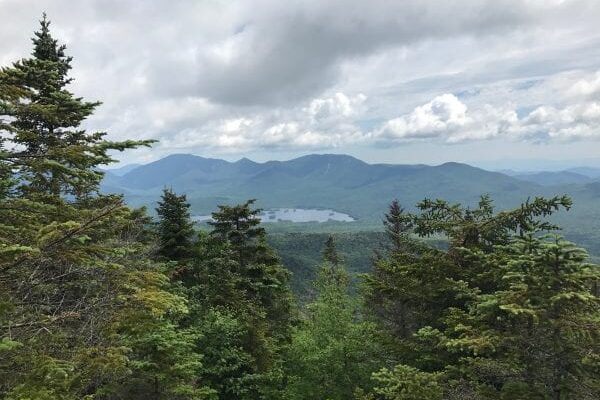 Dix Pond Swamp, and may be one of the more miserable and foreboding places to find oneself in the Adirondack High Peaks backcountry.

Created by a “blowdown” — a mass knockdown of trees — 50 years ago and characterized by knee-deep muck, jungle-thick new-growth trees and voracious black flies, a solo hiker from Singapore earlier this month was rescued after wandering desperately and aimlessly in the swamp for three days after leaving a marked trail and becoming disoriented.

“He told his wife that he was never going to hike that mountain range again,” Forest Ranger Jamison Martin said during an interview with fellow Ranger Andrew Lewis about the Wednesday, June 22, search-and-rescue effort.

For the lone hiker, whose name has been withheld to protect his privacy, the misadventure started on the evening of Sunday, June 19, after he was coming down from the Dix Range, a series of five peaks, including the towering South Dix and Grace Peaks.

That was the point at which his wife, who had been following her husband’s progress from Singapore via his uploads to the fitness tracker app Strava, lost his signal.

Used by runners and cyclists use to plot their routes, Strava worked well above timberline with clear shots to distant cell towers or satellite connections. But in the depths of Dix Pond Swamp, with heavy tree cover, there was no signal.

After not hearing from him for a couple days, his wife called authorities.

Rangers found his rental car, from New York City’s John F. Kennedy airport, parked at the Elk Lake parking lot, which is one of the entry points to the Dix Range.

“He signed in at the register but he didn’t sign out,” said Martin, referring to the rosters at many trailheads where hikers write down their names, phone numbers and planned destinations.

Rangers telephoned others who had signed in and out who told them that they remembered seeing a lone hiker on the trail who, as Martin described it, appeared “whupped” as he was ascending Macomb Mountain.

Knowing where he had been, where his car was and where his last Strava signal came from, the search party — which had grown to 11 people — concluded he was heading back toward Elk Lake and may have ended up in the swamp as darkness and exhaustion set in.

Rangers were keenly aware of how easily one can be turned around in the mucky thicket of trees. “Moving through that swamp is beyond slow,” Lewis said.

A State Police helicopter had been summoned, but thick clouds over the Dix Range prevented it from getting into the area.

By Wednesday afternoon, another ranger, Jason Scott, was at the swamp’s perimeter on an ATV and another ranger had entered the area on foot.

Scott made voice contact with the hiker and they made their way toward one another.

“He was drenched from head to toe,” recalled Lewis.

The man’s rain pants and hiking pants had been shredded, and the soles were coming off his hiking boots.